The movie follows Sam (English), a young blind woman who works at a crisis center answering phone calls on the suicide hotline. She has this one particular caller, John (Mane) who ends up being obsessive and when he finds out that she’s going to be quitting her job, he doesn’t handle it so well. We’re immediately teased that this man is violent and unstable by a disturbing scene inside his home. Yeah, the guy definitely takes his frustrations out on others, pretty much anyone within his reach.

So, once this disturbed caller finds out Sam is leaving the crisis center, he makes his way there and crashes her little going away party. All of this takes place at night and there’s only a handful of people inside the building and these people end up being easy pickings for this deranged psychopath. He goes through each innocent victim like butter until he confronts Sam. This is where he first learns that she’s actually blind and can not see him but he also learns that she’s a survivor, she’s full of fight and she has a few surprises up her sleeve.

Okay, this was a pretty cool watch and really wasn’t what I was expecting. I went into this thinking it would be a horror slasher and it ended up being more of a psychological thriller. The story is cool and intense and all of the characters were interesting, especially certain ones. The cast was small but really great and I think the names alone will draw a certain audience. English, Lords and Mane each have their own group of fans and I don’t think they’ll be disappointed with Devil May Call. I’ve met Tyler Mane a couple of times at conventions and as cool as he is in person, he just makes a really menacing and intimidating bad guy simply because of his size. He towers over you!  Don’t go into this expecting to see a blood bath or crazy special effects because it’s not that kind of movie – it’s all psychological here and very well done.

The front of the packaging features the artwork you see up top and the back includes movie details, a few images and list of extras. Inserting the disc, the menu screen was simple and easy to navigate. The picture and sound quality for this standard-definition release were both really good.

Bottom line is, Devil May Call was an intense psycho thriller and really cool watch.  This is one of those movies where you watch the big bad bully get a dose of his own medicine. This DVD releases on March 10th and is definitely worth checking out.

Special Features: The DVD includes a number of extras as you can see below but make sure you watch the short film, it’s a good one! 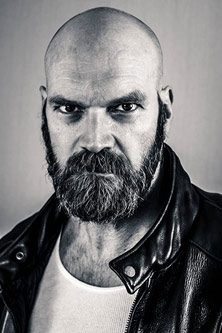