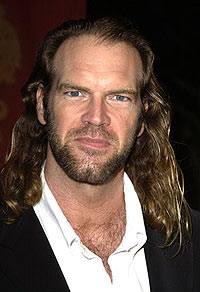 From bringing iconic characters to life to producing feature ﬁlms, Tyler Mane has proven time and time again that he is a force to be reckoned with in the entertainment industry. This year, Mane will star in the highly anticipated Netﬂix original series JUPITER’S LEGACY.

A native of Saskatoon, Canada, Tyler brieﬂy played semi-pro football, before his childhood dream of becoming a professional wrestler began. From 1986-1999, Mane wrestled professionally, all over the world, for the WCW and the UWF, as “Big Sky,” with his tag team partner, Kevin Nash, as the evil Nitron. Mane hung up his wrestling boots in 1999, and fully immersed himself in acting when he realized that was his dream. His acting debut began in 2000, when he starred as Sabretooth in Marvel Studio’s X-MEN. Additional ﬁlm credits include PLAYING WITH FIRE, TROY, JOE DIRT, THE SCORPION KING, Rob Zombie’s HALLOWEEN, where he starred as Michael Myers, and THE DEVIL’S REJECTS, to name a few. On the television front, his credits include HBO and Hallmark’s mini-series HERCULES, HOW TO MAKE A MONSTER, MONK, SON OF THE BEACH, PARTY OF FIVE, THE LIBRARIANS, and MY BOYS!

When Mane isn’t acting, you can ﬁnd him running his production company, Mane Entertainment. Mane’s company has produced two feature ﬁlms: COMPOUND FRACTURE and PENANCE LANE. They are also in the early stages of developing a graphic novel which will be slated to debut later this year.